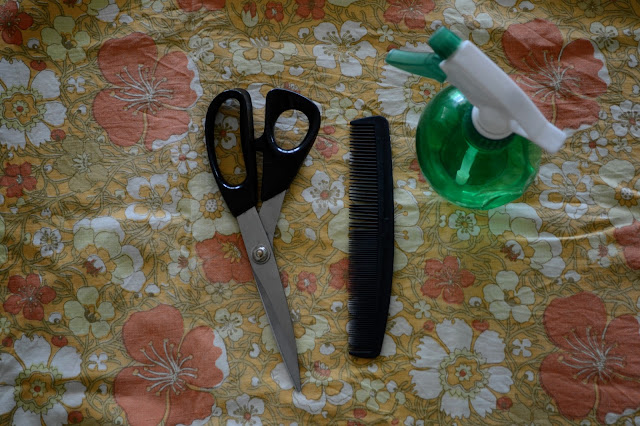 I cut Daniel's hair last night. I'm not sure how many people cut hair at home anymore, but I am increasingly feeling like a bit of an oddity for choosing the home haircut route. Home haircuts can easily conjure up visions of bowl cuts and too short fringes. The occasional mishappen fringes of my past, though, did not put me off learning to cut hair. When I was newly married I always did the hair cuts. But as life got busier we began to pay to get it done. Occasionally we still do, but only for the adults in the family.

Back when I was a kid my mum always cut our hair. Dad's hair also. Though I do remember that she always went to the hairdressers (and would come home with the trendy 80's blow wave). I don't believe money would have stretched enough for us all to get a haircut.

But it's something I've started doing again since living out here. It kind of appeals to that inner diy-er attitude. Rather than outsourcing and paying someone else for haircuts, it's another skill that can be learned and practiced in the home. With practice, nobody will be able to tell. I've had one hairdresser's visit in two years and somehow managed to cut my own hair a few times.

While young girls with standard cuts are fairly easy, male cuts are a little trickier. You could head down the route of the clippers, but I find them unreliable and sometimes a little too harsh. Plus there was one incident many years ago when my brother accidentally shaved a huge chunk out of Daniel's hair. He had to wear a beanie for weeks. So I use scissors and a comb for a boys longer look or a short back and sides (last night's haircut was very similar to this method).

For those wondering you can pick up inexpensive hair cutting scissors from the supermarket. Though of course these are not of a professional standard, they will still do the job.
Dressmaking scissors that are not too heavy are also good. It is what my mum always used. You will also need a plain comb. You can wet the hair with a spray bottle, but I often don't do this.

Take your time. I take quite a bit of time to make sure there is no chunks or unevenness. Of course this does not make one very popular.

My mum always used an old shower curtain draped around the person to catch the hairs. You can occasionally pick these up in new condition from op shops. Fasten with a peg around the neck. Very glamorous! Once the cut hair is swept up it can be added to the compost pile.

There's plenty of you tube videos out there, and I've seen several books on the subject at the library. I learnt by watching hairdressers closely whenever I was waiting at the hairdressers, and through practice (fortunately with no disasters along the way!).


Have you / do you cut hair at home?
Any tips, disasters or successes to share?