A few of you have been asking how the cows were doing, so I thought a cow devoted blog post was in order. Last week was a busy one and it got away on me without being able to spend time on any post. But with a (thankfully) dreary wet day outside it is the perfect excuse for a little blogging update.

Bessie has been with us around 6 months now. She has been good to us beginners, and although there was plenty of learning for both us and her in the beginning, being a first calf heifer and all, I think we really did get into a good routine. Of course there was much trial and error, but I think we really have got the hang of things. At least in the milking department. 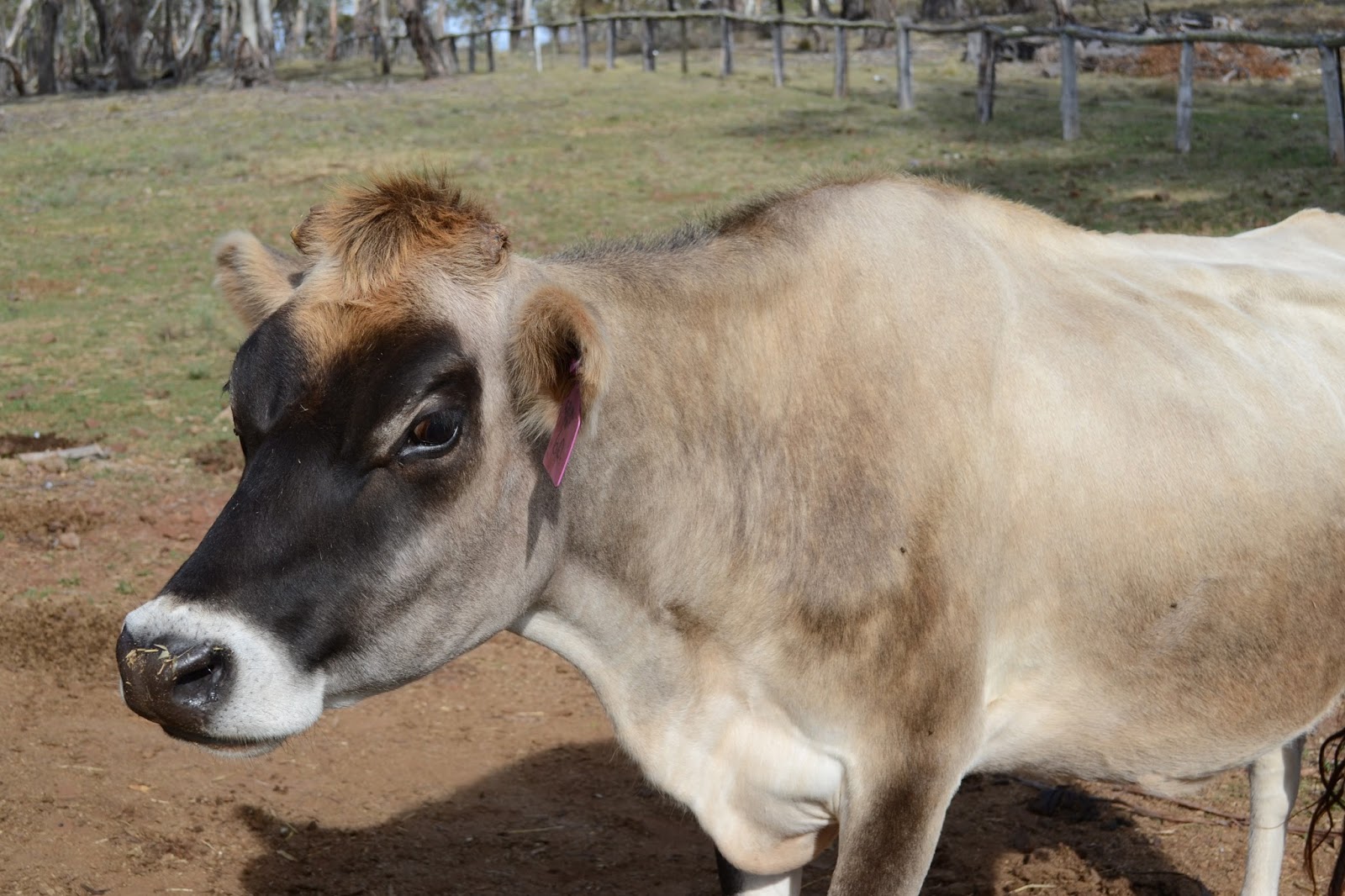 A proper routine has evolved and every morning I drive out to the property. Bessie waits at the fence, often sitting chewing her cud. By this I would know that all was well. On her heat days however, she would be nervously pacing around inside the stables and I would have to coax her out with some good hay. The stables would get cleared of manure, hay brought down from the small shed and her mixture of pollard, barley, sunflower seeds, chaff, beet flakes and minerals made up for her morning and evening bucket. The water is checked and I may have Jerry cans of water with me if there has been no rain.

The morning bucket gets emptied into the feed bucket in the milking bails. I would then get all the milking equipment ready, stool out and get Violet out of the way behind the gate.
I then let Bessie in, who had been making her "foghorn" noise for the past ten minutes or so. 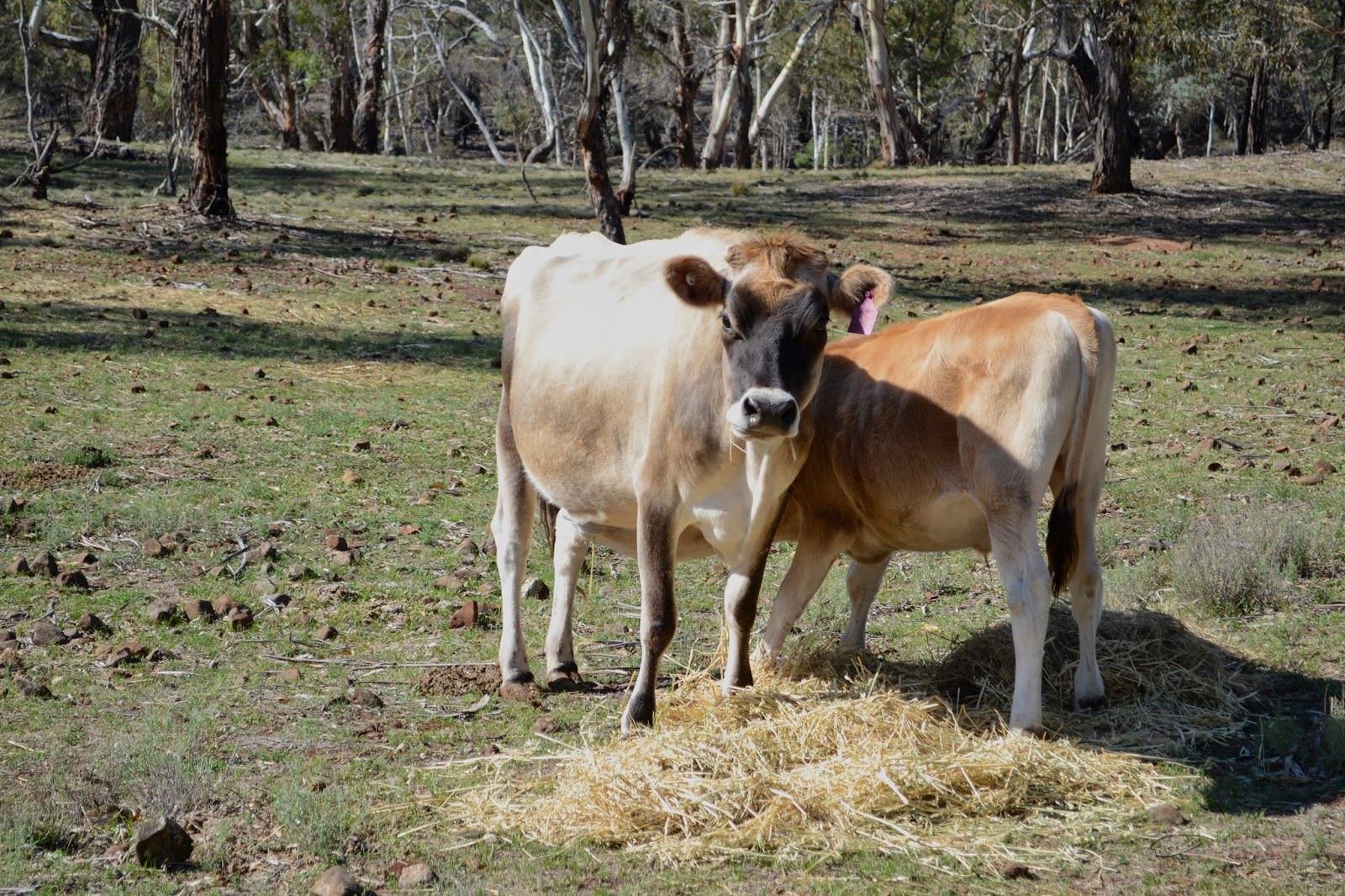 Cows are such a creature of habit which really makes the whole milking process fairly easy in the end. It may take awhile to get there, but in the end you have a cow that willingly walks in, happily eats her grain, lets you bolt the headpiece into place, put a chain behind her to keep her from swinging from side to side, and then a rope tied to keep her leg back. Of course you may not need the leg rope, and I likely don't really need it anymore,  but I view it more as an insurance policy against losing a bucket of milk. Of course one day Bessie swung her other leg and caught the bucket and I lost a hard earned three litres. But you live and learn and you get to anticipate any major shifts in that department.

I then brush Bessie's udder and surrounding area to get rid of any muck. Her udder is then washed with a soap and vinegar mix, dried and then each teat squirted into the ground to get rid of any bacteria. Coconut oil is then coated onto each teat and we are ready to go.

At first milking was terribly difficult. It takes time to learn the best way to milk the teats, and let me tell you that not all teats are created equal. Each teat in my experience ranges from easy to difficult. Bessie's front teats are fairly long (still not long enough to get a complete hand around, but almost) and the milk now comes out quickly and easily. The back teats, however, are small and the milk comes out at a much slower rate. They are hard work those small teats, and you must use your thumb and two fingers, like a stripping action, and they don't produce as much milk. Over time though I have become pretty fast at milking, and I wouldn't really consider a machine at this point. It takes me about ten to fifteen minutes to milk now. It saves all that machine cleaning too. 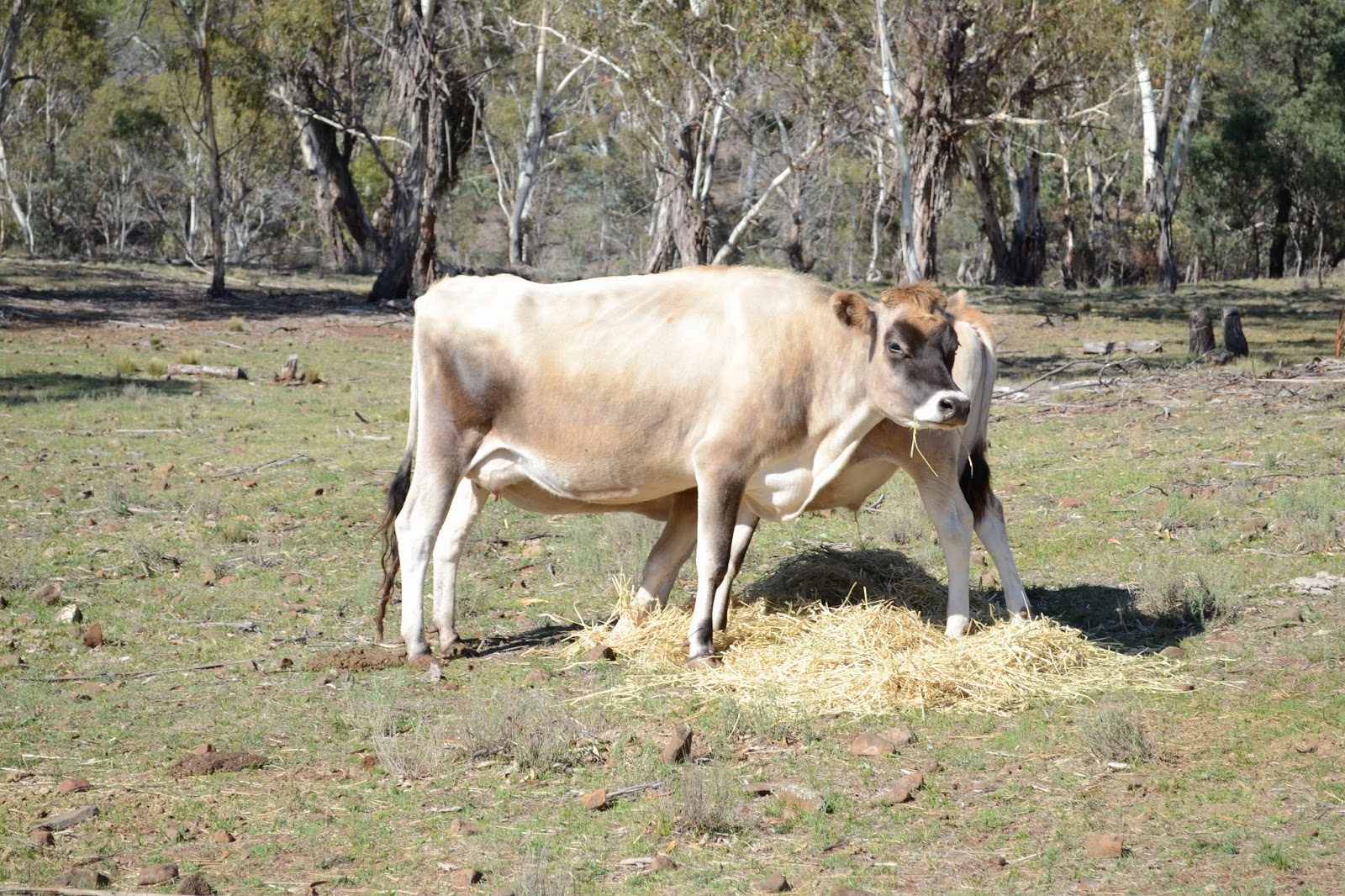 In the beginning we were lucky to get about two and a half litres each morning, but as the months went by, and Bessie slowly gained weight, we were up to 4 to 5 litres each morning. After such a dry summer of virtually no grass, and all feed having to brought in (mostly oaten hay), we did get some small green growth after the rain. The cream line was remarkable. In some bottles the cream was a third of the bottle. As you can imagine, this was very exciting! Well, I was excited anyway.

Then when we've got all the milk we are going to get, I carry the bucket into the feed room, Violet lifts up the lid and we pour the milk into a filter sitting inside the milk can. Fortunately the feed room is nice and cool and we leave it here until we leave. Once we get home I again filter the milk into Mason jars and it is popped into the freezer for a few hours to cool down rapidly.

After milking is done, the hay is carried out, Bessie unbolted and when she is ready she heads out to her hay. I often give her a brush down at this time and tell her what a good girl she is. Bessie is not one to really enjoy a pat, but she will tolerate it. She is mostly all business, but she is a good girl. The calf is then let out and he often tries to scavenge some of the milking grain.

I then clean out the calf room, top up water and with a quick check over we are good to go. In the evening Daniel will pass through on this way home from work. He will feed the evening bucket and feed the calf in his "room" where he willingly goes each night.

We've found calf sharing to be very good for us. We can have the weekends off from milking, and skip a day here or there if the day is going to be terribly busy. It feels more humane to let them be together and they are company for each other. Of course it is not all smooth sailing and our calf has acquired a bit of an attitude in the past month or so. He has grown into a good sized calf, and when the time comes he should make a wonderful rose veal. But for now we try to make his life as pleasant as possible. 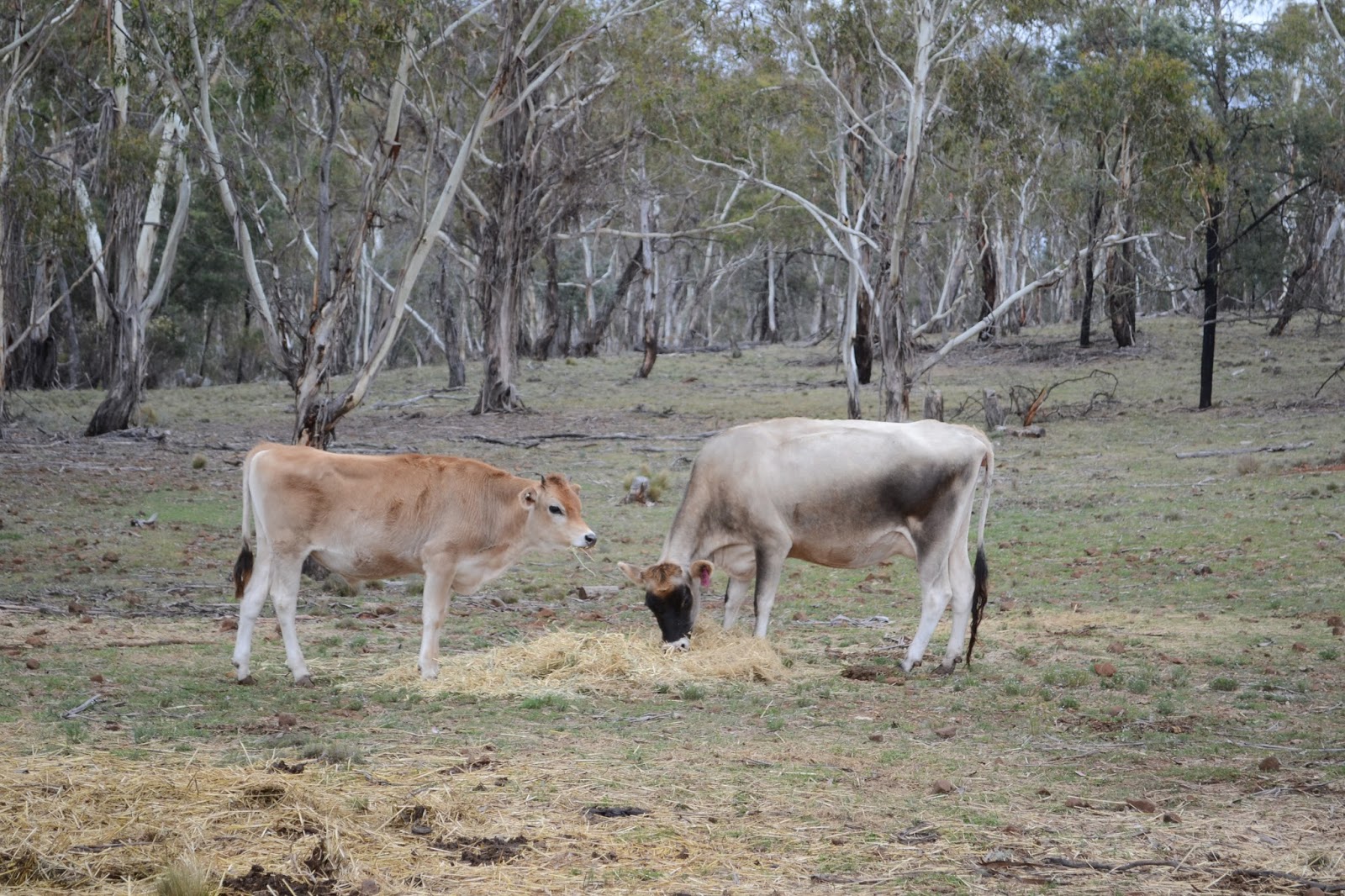 But as I type this we are missing our wonderful raw milk (Incidentally some of us have caught colds for the first time since we were on the raw milk).  Bessie is currently visiting a pure white Hereford bull, and has joined his herd for the past two weeks, with the calf by her side. We drive past them most days and all seems to be fine. Our calf is enjoying many calves to play with. Hopefully another week will seal the deal.

So you might be asking if all this fuss is worth it? For many people it may not be. You really have to like cows. You need to be prepared for unforeseen costs. Feed and supplements are not cheap, but neither are vets, and fortunately we haven't had to have one out yet. Though her hooves have been booked in.

Owning a cow is a huge time commitment and it does makes it difficult to go away. We are still trying to work our way around this. I think many people are scared of such commitments these days, though in times gone by many people had a house cow. Most people around here grew up drinking house cow milk, but now they are few and far between. It can work, but it's not for everyone. 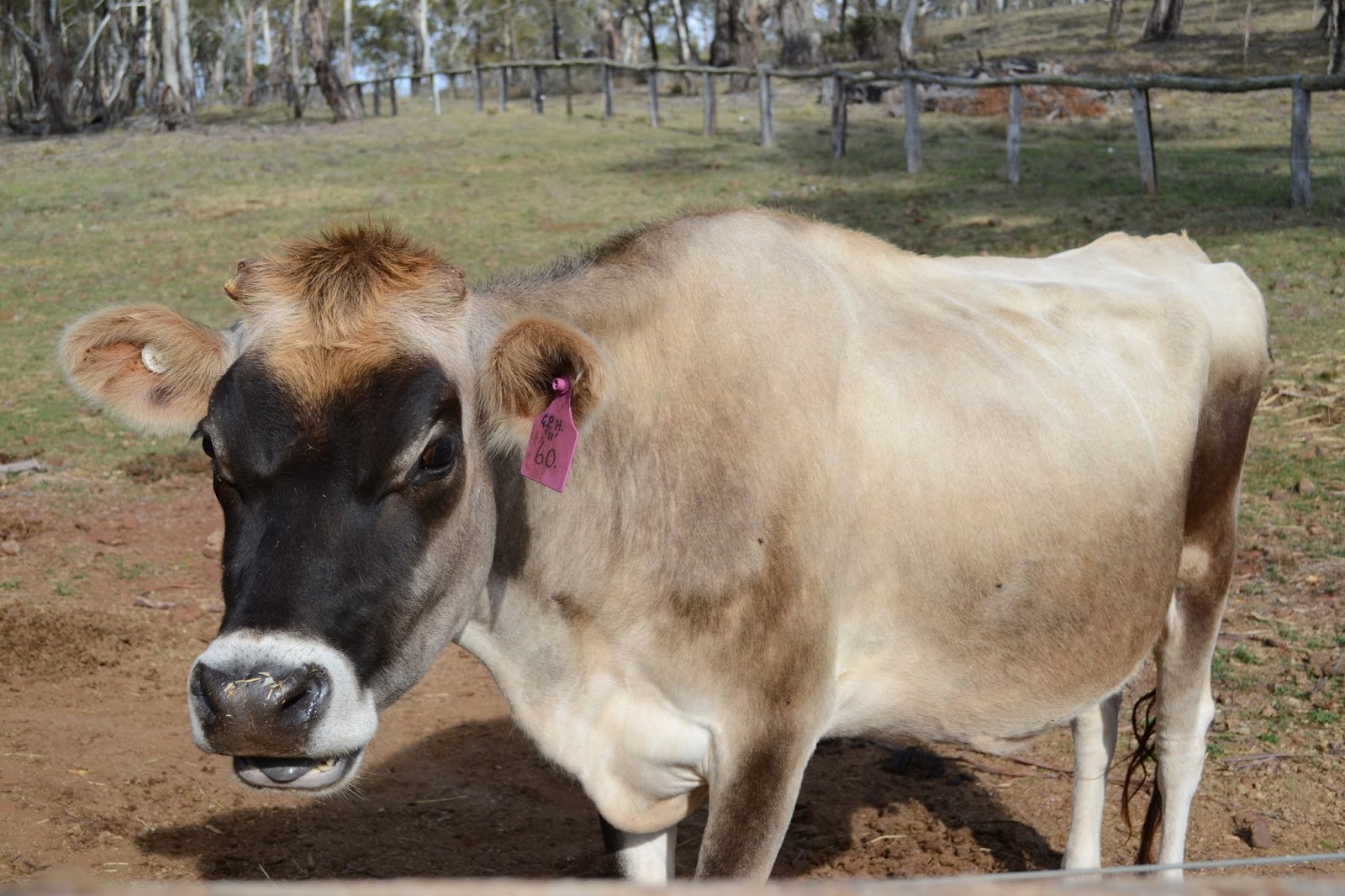 But I do think owning a cow is the ultimate food connection. Milk is no longer just milk. There is a real connection to this large gentle creature. With luck she will also give you a calf each year. The manure will keep your garden healthy. The milk, though, is plentiful and delicious. You will never be able to really enjoy store bought milk again. To me it now tastes tainted, and I am having a hard time of drinking store bought. Not to mention slight sinus which I haven't suffered from in a long time. But this may just be coincidence.

We will be moving Bessie and her calf to the village in the coming weeks. A large 10 acre river flat paddock is available, and there is also a back up smaller paddock should this fall through. I am keeping my fingers crossed.

Some of you may be asking about our calf Shirley. I will try and take some photos this week with an update. She really is growing up.

Until then, I hope your week is a good one, and that those that needed the rain are getting some.

Email ThisBlogThis!Share to TwitterShare to FacebookShare to Pinterest
Labels: our milking cow